Francis joined us towards the end of 2015 and will be handling the administration for the ministry as well as being a liaison between the local pastors and the leadership of Alabaster. He is Malawian and attended university in the United States for a number of years so speaks and writes English very well and thinks outside of the box. In fact all of our staff do. They make unilateral decisions and then come and tell us what it is they would like to do. We like that and are fully prepared to support it especially when it deals with holding crusades or prayer meetings.
Our elderly fall under numerous villages over which are many pastors from varying denominations. We are a non denominational organization and anyone who is in desperate need of help may be included in the program. Between Francis and Peter they decide which are the most needy. We try to turn no-one away which is sometimes very difficult as we are a small ministry and we already have over 400 that we care for.
Since Francis has been with us the ministry has been moving forward like a well oiled machine. I know his family and they all support the fact that he is working with us. Francis can preach, unlike his predecessors which is a great blessing. The added bonus is that he already loves the elderly and enjoys the Lower Shire Valley weather. I manage down there only because God gives me the grace to do so! 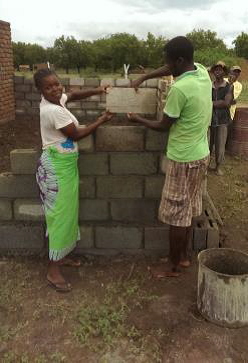 I have known Peter for a good number of years and always wanted him to work with us but thought that he was being groomed to one day take over his father’s church. When his father said no I immediately grabbed him. He comes with a wife and four boys and has moved from the mountains of Chididi to Tengani. This is an enormous move for them and we are blessed that they would sacrifice their beautiful and prosperous mountain village for the unrelenting heat and barrenness of the Tengani area. He is a wonderful praise and worship leader and also a preacher. His father and mother pastor and oversee our work in Chididi. He will be responsible for overseeing the elderly. That will entail going from village to village to visit them in their homes and to have Bible studies and prayer meetings with them. We recently purchased a 150 cc dirt bike for him which will enable him to get around much more easily.
He was trained in the things of God by sitting at his father’s feet and being discipled by him and in addition to that he also attended the Bible School with Pentecostal A/G Canada. There is a school across the road from our property and it will be ideal for Peter’s sons to go there. We have just completed his house on the property and are gradually furnishing it. We have almost completed his church building. His church is flourishing and growing rapidly. Peter also leads the 100 or so youth in the Tengani area. His wife Martha is on staff and heads the ladies ministry in the valley. 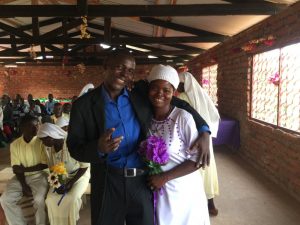 PASTOR SHEDRECK
Shadreck is a graduate of our first Bible School class that graduated February 2019. He is pastor to the elderly in the Chididi Mountains and is now one of the teachers at the Bible School. He and his wife pastor a church at Ntondo village. He is learning English at an incredible speed because he wants to learn to translate for me. Since he attended the school along with his wife his church has grown at an amazing rate. We are presently preparing to extend his church for him. They have a powerful ladies group run by his wife that are the evangelists of the church.

PASTOR ERIC
Eric is also a graduate of our first Bible School along with his wife. He oversees the elderly in the Lower Shire. He goes to the different villages holding Bible Studies and prayer meetings with them. He also has a church that he Pastors. He is quiet but a real asset to the ministry. He was cycling back and forth -long distances. He never told us that he had a motorbike that needed a few repairs done to it. We bought the parts and he can now get to his various destinations much faster. 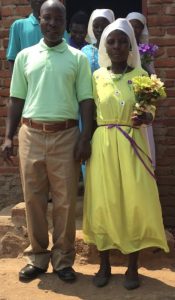 PASTOR GOME
Mrs. Gome attended the first Bible School along with her husband. The water used at the school has to be carried from quite a distance and I had banned the students from bathing twice a day because it was too much work for our cooks to keep carrying water. During school the males stayed in the church and the wives stayed at various homes in the area. Mrs. Gome came and asked me at the end of her first school if she could have some water. It was midday and I told her if she wanted water for her husband she would have to go and get it herself. I only found out later that she wanted water to clean out all the toilets that had been used during the week. What an impact that made on me. After they graduated their church numbers grew rapidly. I had already decided that she should be overseer of the ladies in Chididi area which was confirmed by Francis. Before we could have a meeting she and her husband walked 10 miles to bring us some fruit and sat down to lunch with us. She said that the ladies wanted meetings more often than they were having them. That confirmed it for us so she was appointed and is now on staff. 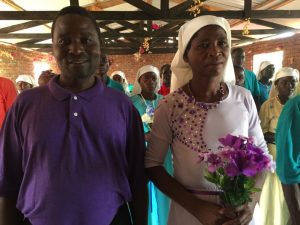